Given a geometric object (such as a curve, surface, or manifold), one may ask: what is the optimal representation of this object?, where the meaning of "optimal" depends on the person asking the question. Geometric evolution equations are one approach to optimization, inspired by the way heat dissipates to a steady-state temperature distribution. The hope is that the "optimal" shape will be optimal not only quantitatively (e.g., shortest) but also qualitatively (e.g., most symmetric).

My primary interest in this area is mean curvature flow, which arises when we consider submanifolds and take "optimal" to mean "smallest local area". I am also interested in other flow techniques, such as the Ricci flow and Hermitian curvature flow, which study Riemannian and Hermitian metrics and for which "optimal" means "solves Einstein's equations".

Unlike the ordinary heat equation, none of these flows is a linear PDE, we expect to encounter singularities before reaching minimizers; these singularities need to be resolved in some coherent scheme in order to continue the flow and proceed toward the optimizer. In order to do this, one must have a very clear picture of what exactly happens to cause the flow to become singular. One also hopes to be able to describe the gross structure of the object in terms of where and how the singularities develop.

Chromatic Homology and Its Generalizations 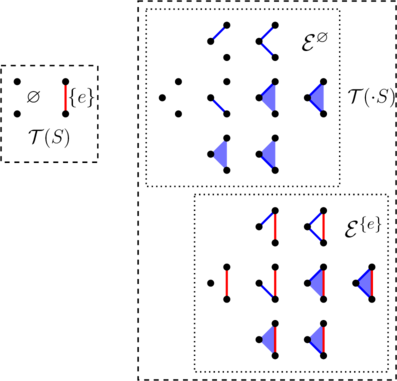 The chromatic polynomial is a classical invariant (introduced by Birkhoff in 1912) of graphs which measures colorability. This polynomial invariant was categorified to a homology theory by Helme-Guizon and Rong in 2004, and (in a somewhat different way) by Eastwood and Huggett in 2007. Radmila Sazdanovic and I have generalized both the Helme-Guizon-Rong construction and the Eastwood-Huggett construction (with Vin de Silva) to give homology theories which are invariants of simplicial complexes. In particular, this homology theory yields a new polynomial invariant of simplicial complexes, whose interpretation remains somewhat mysterious.

I am also interested in how we could view any or all the flavors of chromatic homology (Eastwood-Huggett's, Helme-Guizon-Rong's, or Sazdanovic's and my version) as counting solutions of some elliptic PDE.